The Ascension of our Lord 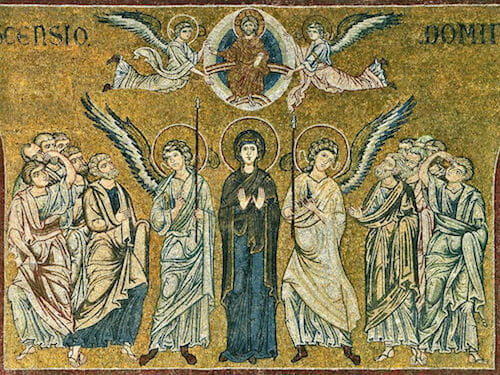 From The Ascension of the Lord and the Deification of Humanity

by Patriarch Daniel of Romania

This raising of the human being was possible because the Christ risen in glory never gave up the human nature, but assumed it completely and took it to the very center of the life of the Holy Trinity. Christ does not go back to heaven and does not present Himself to His Father only as God, but also as human, so that He may make us, humans, children of God according to grace in the glory of the kingdom of heaven (John 1:12 and 17:24).

Orthodox theology teaches us that the Ascension of Christ in glory and His sitting on the right side of the Father represents the full deification of His humanity and also the eternity of humanity in God, the spiritualization or full transfiguration of His human body, namely His supreme elevation to the state of “transparent milieu of the infinite love of God”—as Father Dumitru Staniloae says. The human being is raised to the supreme honor, in utmost rapprochement and full communion with his Creator, in the very intimacy of the divine existence of the Holy Trinity. Consequently, one can see that the Ascension of the human being into the divine glory was the very purpose of the descent or incarnation of the Son of God. In a sermon at the feast of the Ascension of the Lord, Saint Gregory Palamas shows that Christ was “ascended in glory and entered into the Holy of the Holies not made by hands and sat on the right side in the heavens, on the same throne of divinity, so that our nature, with which He mixed, should share in it”. Thus, the Ascension of Christ in glory means the deification and glorification of the human being in the eternal love of God.

The full text for this sermon is available here.