On the Feast of Palms 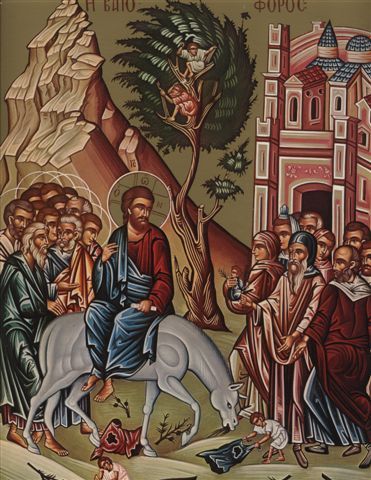 Mounted on the throne in heaven, Christ God, and on the colt on earth, You accepted the praise of the angels and the hymn of the children who cried to You, “Blessed are You Who come to call back Adam.”

At first the ungrateful Jews with branches praised Christ God, later with staves arrested Him. But as with faith unchanging we ever honour Him as Benefactor, Let us cry to Him, “Blessed are You Who come to call back Adam.”

1 Since you bound Hell, slew Death and raised the world, with palms the infants praised You, O Christ, as victor, crying out to You today, “Hosanna to the Son of David. For no more”, they say, “will infants be slaughtered because of Mary’s babe, but for all, infants and elders, you alone are crucified. No more against us will the sword advance, for Your side will be pierced by a lance. Therefore we rejoice and say, ‘Blessed are You Who come to call back Adam.'”

2 Behold our King, meek and gentle, seated on the colt, draws near with haste to suffer and to cut off the passions; the Word upon an irrational beast wishing to deliver rational creatures; and it was possible to see on the back of a colt the One who rides on the shoulders of the Cherubim, Who once took up Elias in a fiery chariot, He who is rich by nature making Himself poor by design, and weak by intention, He who empowers all those who cry to Him, “Blessed are You Who come to call back Adam”.

3 All Zion was shaken as once Egypt was. There the inanimate, but here the animate were shaken as You came, O Saviour, not because You are fomenter of trouble—for You are the sower of peace—but because You abolish, as Maker of all things, all the trickery of the foe, driving him from everywhere as You reign in every place. Their idols fell down of old, and now those who favour them are shaken as they hear the voices of infants, “Blessed are You Who come to call back Adam.”

5 Ungrateful, lawless, they welcomed ignorance, indeed were ignorant. The one they were plotting to kill they did not know, the sons of falsehood! What they say is not strange. They are repeating the past. Moses led them out of Egypt; he was immediately denied by them. And Christ, who saved them from death, was now unknown. They did not know Moses, those who knew the calf. They denied Christ, the friends of Beliar. Then it was “What has happened?” But now they said, “Who is this Who comes to call back Adam?”

6 With palms infants sing your praise, calling You Son of David rightly, Master; For it was You who slew the Mocker, the spiritual Goliath. David the dancing maidens extolled after his victory, “Saul slew them in thousands and David in ten thousands”. That is: the Law, and after it, Your Grace, my Jesus. The Law was Saul, envying and persecuting, but David persecuted, sprouted grace, for you are David’s Son and Lord, Who come to call back Adam.

7 The sun is a chariot of light, and, resplendent as a carriage, it is enslaved to You, and it is subject to Your command as Creator and God. And now a colt was your delight. I worship Your compassion, since once for me You were laid in a manger, wrapped in swaddling clothes, and now you are mounted on a colt, who have the heaven as Your throne. There the angels encircled the manger, here disciples held the colt. “Glory” You heard then, and now, “Blessed are You Who come to call back Adam.”

8 You showed Your strength in choosing penury, since for You to be seated on a foal is a form of beggary. But in glory You shake Zion. The disciples’ garments signified penury, but the sign of Your might was the hymn of the children and the gathering of the crowd crying “Hosanna”—that is Save now&mdash”in the highest”. Most High, save the humbled; Have mercy on us, as You look on our branches. Boughs that are brandished will move Your compassion, O You Who come to call back Adam.

9 Adam contracted for us the debt that we owe, by eating what he ought not, and until today it is demanded of us who are descended from him. The creditor was not satisfied with seizing the debtor, but he attacks his children too, demanding the ancestral debt, and empties the debtor’s house entirely, sweeping everyone away. And so let us all flee to one who is powerful. Knowing that we are in dire poverty, do You yourself pay back what we owe, for You are rich, Who come to call back Adam.

10 You have come to deliver all, and Your prophet Zachary, who once called You most meek, just and who save, is Your witness. We were wearied, we were worsted, we were utterly cast out; we thought we had the law as our redeemer, and it enslaved us; the prophets too, and they left us on our hope. And so with infants we bow the knee to You. Have mercy on us who have been humbled, be willing, be crucified, and tear up the record of our debt, You Who come to call back Adam.

11 “Creature fashioned by my hand”, the Fashioner answered those who shouted, “knowing that the law had no strength to save you, I have come myself. It was not for the law to save you, since it did not fashion you. Nor was it for the prophets, because they too are My fashioning just as you are. Mine alone was the task of releasing you from this most heavy debt. I am being sold for your sake and I shall free you. I am being crucified for you and you are not being made to die. I die and I teach you to cry, “Blessed are You Who come to call back Adam.”

12 For was it for angels that I showed affection? It was you the pauper that I befriended. I hid my glory And I, the Rich, have willingly become poor, for I love you greatly. I was hungry, I was thirsty, I toiled also for your sake. I passed by mountains, cliffs and valleys, seeking you, the lost. I was named “Lamb”, that attracting you by my voice I might lead you; “Shepherd”, and for you I am willing to lay down my life, that I may snatch you from the hand of the wolf. I suffer all, wishing you to cry, “Blessed are You Who come to call back Adam.”

13 But after words He showed it by deeds, for He reached the city, and the hymn of the children enraged all his enemies. Raising His eyes He gazed on Zion and wove a lament over her, crying, “Groan aloud, Jerusalem, because you have found children to be fathers, teachers your sons. In evil and wickedness you are a youngster, for doing good you are weighed down by old age. Better than you are those who cry to Me “Blessed are You Who come to call back Adam.”

14 Now I shall enter you and casting you aside reject you, not because I have hated, but because I have understood that you have hated Me and Mine. Your children have prepared a cross for Me in return for what? Because with a staff I rent the sea apart like a tunic before them? Do they carve out a tomb because I gave them a cloud as protection? And I rejoice, since for their sake I came, and I long to suffer in My love for the fallen, that those who love me may say, “Blessed are You Who come to call back Adam.”

15 So He who sees the inmost heart reproached the city sluggish of heart and enters the temple with all the infants, He the universal priest. The Son arrived in his Father’s house. And cast out both sellers and buyers together, saying, “Let nothing remain here; for we are leaving here, I and my Father together with the Spirit. Now we have found a court: the will of the meek, of those who with their voices faithfully cry to Me, ‘Blessed are You Who come to call back Adam.'”

16 All-holy Son of God, number us together with those who sing Your praise, and receive the supplication of Your servants as once the children’s. Have mercy on those You fashioned, amongst whom You dwelt in love. Give peace to Your churches, shaken by enemies, and send down to me, O Saviour, release from my iniquities. Grant me to speak what You will, as You will, and do not let grief make my mind sluggish. Show me to be a skilled cultivator to cry, “Blessed are You Who come to call back Adam.”