Parable of the Sower

In the name of the Father, the Son and the Holy Spirit.

In today’s Gospel the Lord begins the parable by stating:

“A sower went out to sow his seed. And as he sowed, some fell by the wayside; and it was trampled down, and the birds of the air devoured it.”

Our Christ reveals the meaning of this statement by saying:

“The seed is the Word of God. Those by the wayside are the ones who hear; then the devil comes and takes away the word out of their hearts, lest they should believe and be saved.”

Here we can see from our Lord’s description the truth that the devil is like a roving lion, ready to pounce on his prey. He truly is the enemy of our Salvation and Christ continues the parable by saying:

“Some fell on rock; and as soon as it sprang up, it withered away because it lacked moisture.”

Our Saviour explains this statement to mean:

“… the ones on the rock are those who, when they hear, receive the word with joy; and these have no root, who believe for a while and in time of temptation fall away.”

We can identify those in this category as the ones who may be attracted to the Gospel immediately because they know in their heart it’s true, yet they really don’t want to repent.

That’s why they have no root when temptation comes.

To these kind of people, Salvation is merely a concept—an attractive idea; after all—who wants to burn in hell, right? But, it’s not a concept that they actually want to “live out” according to the precepts of the Gospel, because it takes pain and effort.

In fact, some even claim there’s nothing more to repent of because Jesus washed away and paid for all of our sins; kind of like a Protestant version of the heretical indulgences once promoted by the Latins.

However, in today’s epistle reading St. Paul said, “… if, while we seek to be justified by Christ, we ourselves also are found sinners, is Christ therefore a minister of sin? Certainly not! For if I build again those things which I destroyed, I make myself a transgressor.”

Continuing on, our Christ says in the parable:

“And some fell among thorns, and the thorns sprang up with it and choked it.”

For this statement, He explains:

“Now the ones that fell among thorns are those who, when they have heard, go out and are choked with cares, riches, and pleasures of life, and bring no fruit to maturity.”

Notice here Christ admits these people are actually able to produce fruit, but it never reaches maturity. Maybe they get baptized, are zealous for a few years, start to show the beginnings of fruit on the vine, but then “cares of the world” set in. Maybe it’s work—they’ll say, “I can’t come Church, go to Confession and come to the Chalice because I have to work on Sunday, and besides, I don’t have time to properly prepare, so …”

All this ties in with the pursuit of money, causing neglect in the Spiritual life. And then they seek pleasure, because of working so hard. You can fill in the blank here, as many challenges can fit in this category.

The point is, the struggle is set aside, just as spiritual fruit is starting to show on the vine.

And lastly, concerning the third category of people, the Lord states:

“But others fell on good ground, sprang up, and yielded a crop a hundredfold.”

And Christ explains this saying as:

“The ones that fell on the good ground are those who, having heard the word with a noble and good heart, keep it and bear fruit with patience.”

From this we learn that sincerity, nobility are the qualities of a good heart. The Word is kept in patience, bearing good fruit.

This means they persevered when tempted, for example, to stop watching their tongue.

This means they patiently struggled through difficult people, or were wise enough to completely separate themselves from people who were a source of temptation, as St. John Chrysostom recommends us to do.

The bottom line is these kinds of people are able to attain the will power needed to actually apply the Gospel, second to second. And it’s not easy!

So may God bless us to remain rooted in the good soil, nourished by Christ, and provided here on earth by that encompasses His Church. 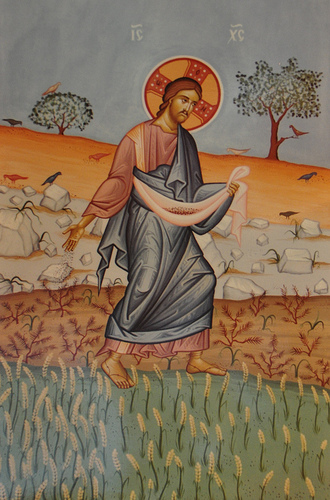