The Sunday of the Blind Man
John 9:1-38
From the Explanation of the Gospel of St. John,
by Blessed Theophylact, Archbishop of Ochrid and Bulgaria 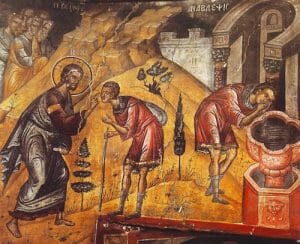 In this excerpt from his commentary on the gospel account of the blind man in John 9:1-38, Blessed Theophylact addresses the question, “Was it not unjust to deprive this man of his sight so that the works of God should be made manifest in him?” The complete text is available at www.chrysostompress.org/.

3–5. Jesus answered, Neither hath this man sinned, nor his parents: but that the works of God should be made manifest in him. I must work the works of Him that sent Me, while it is day: the night cometh, when no man can work. As long as I am in the world, I am the light of the world. Now another perplexity arises. One might ask, “How could Christ say this? Was it not unjust to deprive this man of his sight so that the works of God should be made manifest in him? Could not these works have been revealed some other way?” We would answer, “How have you been treated unjustly, O man?” “I have been robbed of light,” he replies. “But what harm did you suffer by being deprived of material light? Now you have received not only physical vision, but that incomparable blessing—the enlightenment of the eyes of your soul.” Thus the affliction was to the blind man’s benefit, and through his healing he came to know the true Sun of Righteousness. Therefore, the blind man was not wronged; he was blessed.

Now, understand this as well, every student of Divine Scripture: the conjunctions ἵνα and ὅπως (both translated in English as “that”) are often used to express the outcome, but not the intended result, of the action stated in the main clause. Thus David says, Against Thee only have I sinned, …that Thou mightest be justified in Thy words (Ps. 50:4). The word that introduces a result unintended by David. When David sinned, he did not do so with the purpose in mind of justifying God; but his sinning did result in God being justified. David proved himself unworthy of all that God had given him: he abused his royal power, committed murder and adultery, violated divine commandments, and showed contempt for God. Taking advantage of his kingship, David spurned the laws of the One Who made him king. Had he been a commoner, he would have been unable to commit the two great sins so easily. Once the Lord had examined and decided his case, the necessary consequence of David’s crimes was that God was justified and had prevailed over the king who was condemned. There are many places in the Epistles where such expressions are used. In Romans Paul writes, “Because that which may be known of God is manifest to the Greeks, for God hath showed it unto them, making His eternal power and Godhead . . . understood by the things that are made, . . . so that they are without excuse (Rom. 1:19-20).” God did not give this knowledge to the Greeks in order to deprive them of any excuse when they sinned. He gave it to them so that they would not sin. When they did sin, their knowledge of the Creator manifest in His creation rendered them guilty without excuse. Likewise, in another place Paul says, The law entered, that the offense might abound (Rom. 5:20), although the law certainly was not given in order to make sin more prevalent, but just the opposite, to keep it in check. But because the recipients of the law did not want to restrain their sin, the law—defining what is a transgression—resulted in sin “abounding.” They considered their sins to be greater and more numerous because they sinned with full knowledge of the law.

In light of all this, Jesus’ words here, that the works of God should be made manifest, do not supply the reason why the man was born blind, but state the consequence—good came from evil, to the glory of God. Let us suppose that a man builds a house but leaves one portion of it unfinished, for this reason: at a later time, if anyone should question if he were the builder, he could dispel any doubt on this score by completing the unfinished part to match perfectly with the original. In like manner, Jesus our God fashioned all the members of the blind man’s body except for the eyes, which He omitted. By healing them now, He completes the divine act of creating and demonstrates that He is the Creator. When He said, “that the glory of God should be made manifest,” He was referring to Himself, not the Father. The glory of the Father was obvious; it was His own glory, equal to the Father’s, that needed to be revealed. For He Who now appears as a man, in the beginning fashioned man. That He is speaking about Himself becomes clear from what follows: “I must work the works of Him that sent Me. I must reveal Myself by doing the very same works as the Father.” Note that He does not say, “I must do works similar to the Father’s,” but ” works identical to those done by the Father Who sent Me. I must do them while it is day, that is, during this present life, when men can choose to believe in Me. For the night cometh, when no man can work, that is, believe. In the age to come, it will be too late to believe.” Day means this present life, when we are able to work, as we do during the day. But, elsewhere in Scripture, Paul calls life night, because we cannot know in this life whether a man pursues virtue or wickedness—his thoughts and motives are hidden from us. Moreover, Paul calls this life night by comparison to the daylight of the age to come, in which the righteous will shine. Christ refers to the age to come as night, when no man can work; Paul calls this day, since the righteous will be illumined and the deeds of each revealed. In the age to come there will be no faith, but only obedience—voluntary or involuntary. “As long as I am in the world, I am the light of the world,” says Christ, “because I enlighten souls by My teaching and miracles. By healing the blind man’s eyes and giving them light, I shall enlighten the souls of many. I am Light, and I illumine both the senses and the spirit.”